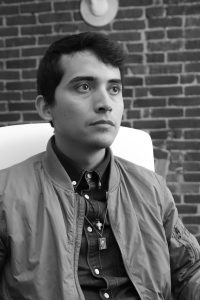 Alejandro was born in a city called Ambato, located in a valley near The Andes mountain range in Ecuador. He studied Graphic Design at the Universidad Catolica del Ecuador. And attended art school at the Nueva Escuela de Diseño y Comunicación in Buenos Aires – Argentina. He won the National Painting Prize Luis A. Martínez when he returned to Ecuador, and an honorable mention in the “November Painting Prize” in the same year. After making installations in public spaces in Ambato-Ecuador, he traveled to Pittsburgh USA and exhibited his work in group and solo exhibitions. He started working as an illustrator and developed new paintings using digital tools. He was part of the Annual Exhibition of the Associated Artists of Pittsburgh in 2019 which took place at the Westmoreland Museum of American Art. He is currently working on his next body of work consisting of oil and digital paintings. 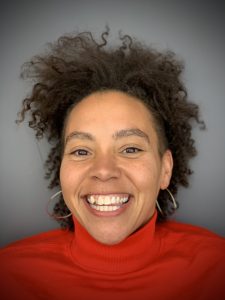 Alisha B. Wormsley is an interdisciplinary artist and cultural producer. Her work is about collective memory and the synchronicity of time, specifically through the stories of women of color. Wormsley’s work has been honored and supported with a number of awards and grants to support programs: The People Are The Light, afronaut(a) film and performance series, Homewood Artist Residency (recently received the mayor’s public art award), the Children of NAN video art series, There Are Black People in the Future body of work. Recently awarded a fellowship with the Monument Lab.  These projects and works have exhibited widely. Namely, the Andy Warhol Museum, Octavia Butler conference at Spelman University, Carnegie Museum of Art, Johannesburg SA, HTMLES in Montreal, Project Row House, the Houston Art League, Rush Art gallery in NY, and the Charles Wright museum in Detroit. Currently, Wormsley is working on a number of public art projects and exhibitions, namely, The People Are the Light Publication, August Wilson Park, ArtUp South Africa at the Mattress Factory, and Pittsburgh’s Market Square. Wormsley is now working on Sibyls Shrine, a residency for black mothers and the Children of Nan Survival Guide and instructional video for black women. Wormsley has an MFA in Film and Video from Bard College and is a Presidential Post Doctoral Fellow at Carnegie Mellon University. 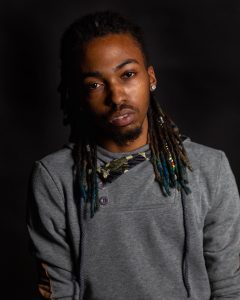 Amun Ray is a young black multi-platform artist with a stronger focus on visual arts. He was raised within the arts and from a young age he was either painting a picture, writing a story or poem, or on stage performing. For Amun Ray, the arts have always been therapeutic, helping him make sense of the surrounding world. His talents have lead to one of the greatest accomplishments of his life, designing a community park in Wilkinsburg. Overall the arts have always been in his life in one way or another Ray has spent most of his life dealing with both physical and mental health issues, in addition to bullying. Even though he has been painting and drawing from a young age, it wasn’t until 10 did he truly use art-making as expression and an escape. Ray is also a Creative consultant/ artivist for 1hood Media, and teaching artist at Boom Concepts 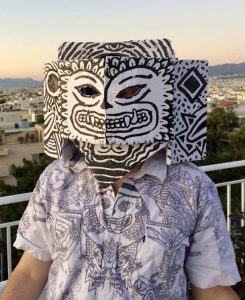 Draftsman and filmmaker, Dorion Barill produces site-specific work by mining dream imagery and local history. Orbiting conditions of fear and irrationality, his artwork presents utopian visions on the threshold of consciousness. A compulsive sketcher, he focused his mark as a technical illustrator at Phil Fraley Productions Inc, contributing to the development of exhibits at the State Museum of Pennsylvania, and the Natural History Museum of Los Angeles County. He’s been awarded residencies in Rome and Cappadocia, with an exhibition record that includes the Palace of Saint Michael and Saint George in Corfu, Greece, the Three Rivers Arts Festival Juried Exhibition in Pittsburgh, and the Castello Colonna in Genazzano, Italy. He was a recipient of The Pittsburgh Foundation’s 2013 Investing In Professional Artists Grant. In 2010, he graduated with a BFA in Illustration from the Rhode Island School of Design. 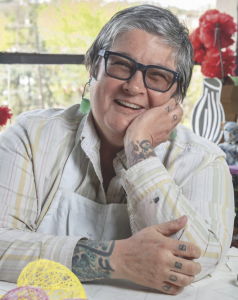 Edith Abeyta is a visual artist living in North Braddock, Pennsylvania. Her current practice is centered around people, identity and negotiating relationships with the built environment. This manifests as temporary installations, sculptures and experiential life events. She frequently collaborates with other visual artists, poets, scholars, and the public.

Abeyta has been working as an artist in residence with the Office of Public Art at the Carnegie Library of Pittsburgh – Hazelwood since June 2014. Her work with Hazelwood residents has directly resulted in a multi-year project, Arts Excursions Unlimited, a free monthly arts excursions program, an art studio and temporary public art. Other residencies include the University of Utrecht, The Netherlands, the University of Burapha, Thailand, Pilgrim School, Los Angeles, and Windward School, Los Angeles. She was awarded a fellowship from the Netherlands Organization for Scientific Research in 2007. She has received public art commissions from the Arts Council for Long Beach and the Pittsburgh Cultural Trust. Her work has been exhibited at the Lakenhal Museum Lieden, the Netherlands, Burapha University Gallery, Thailand, Long Beach Museum of Art, the Craft and Folk Art Museum, Los Angeles and the Carnegie Museum of Art, Pittsburgh. 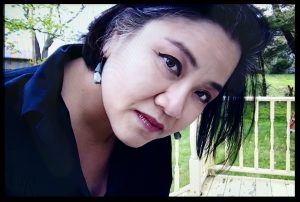 Fran Flaherty is a deaf artist living in Pittsburgh for over 25 years. A a first generation immigrant from the Philippines, her work is centered in issues surrounding migrant family relations and assimilation, maternal feminism, disability aesthetics, and social work. Her work is inspired by the care paradigm. A premise that human beings cannot survive alone, and the progress of human beings, as a species, flows from our identity as social animals, connected to one another through ties of love, kinship, and clanship. It is the prospect of this harmony that inspired her to create Anthropology of Motherhood, an ongoing project which highlights artworks of art that engage in the complex visual, material, emotional, corporeal, and lived experiences of motherhood, caregiving, parenting, nurturing, and maternal labor. Fran currently resides in Allison Park with her husband Tim, their sons, and her hearing dog, Olympia. 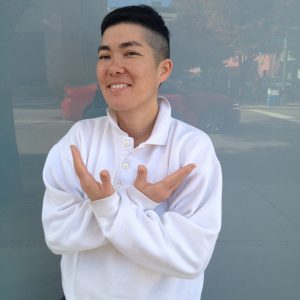 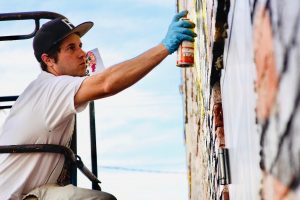 Shane Pilster is an artist, muralist, curator, graphic designer and web developer. Bridging his expertise in graffiti and urban arts with community involvement, he prides himself in also being an educator, advocate, mentor and well-rounded creative individual. Originally from the San Francisco Bay Area, Shane has called Pittsburgh his home since 2004 and is a pioneer in bringing awareness and shining a spotlight on urban art and its artistry in ways never done before in the region.

Working with Rivers of Steel since 2012, he created its Urban Art Tour and interactive workshop curriculum to showcase the post-industrial history of Carrie Furnaces, alongside its unique canvas for experienced and emerging artists and muralists from around the world. In addition to organizing and curating the legal painting areas of this National Historic Landmark, he has increased the scope and reach of his art programming in schools and communities, as well as organized art components and live demonstrations at events such as Homestead First Fridays, Thrival Festival and the Three Rivers Arts Festival. 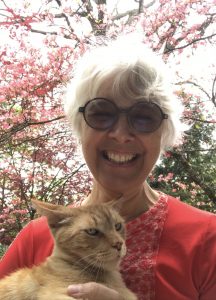 Susanne Slavick is an artist, curator and the Andrew W. Mellon Professor of Art at Carnegie Mellon University. Her curatorial projects include When the Bough Breaks (2019); Marx@200 (2018) commemorating the legacy of Marx and his critique of capitalism; Unloaded (2015-19), a traveling multimedia group show exploring the impact of guns in our culture; and Out of Rubble (2011-15) a book and traveling exhibit featuring international artists who respond to the aftermath of war. Slavick has exhibited internationally, with more recent solo shows at the Chicago Cultural Center, McDonough Museum in Youngstown, Accola Griefen Gallery in New York, and Gettysburg College. She studied at Yale University, Jagiellonian University in Krakow, and Tyler School of Art in Rome and Philadelphia. Her work has been recognized by the National Endowment for the Arts and through four awards from the Pennsylvania Council on the Arts. In 2019, she was awarded the College Art Association Distinguished Teaching of Art Award and the College of Fine Arts Henry Hornbostel Teaching Award. Slavick’s essays and articles have appeared in: Journal of Visual Culture; Technology and Culture; Formations of Identity: Society, Politics, and Landscape; Cairo: Images of Transition; Hyperallergic, Cultural Heritage and Arts Review; Cultural Politics; and Guernica: A Magazine of Art & Politics. 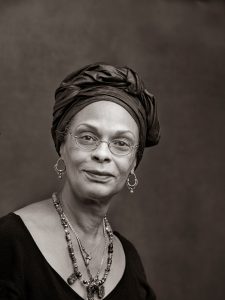 Tina Williams Brewer is a teacher and dedicated resident artist for the Pittsburgh Center for Arts & Media Artist Residency Program in partnership with the Pennsylvania Council on the Arts. She has touched the lives of thousands of students and hundreds of educators over many years. Students are fully immersed in an art form by Tina and see how it connects to life and learning. Teachers are exposed to alternative ways of teaching in order to bring more creative learning experiences to their classrooms, and administrators recognize the ways in which the arts fully engage students and impact their learning across the curriculum.

Tina Williams Brewer is known for her artistic exploration of African-American history and the personal experiences associated with it. She uses symbolism, textile, and fabrics to create story quilts that are motivated by issues focusing on family, women and children, and the spirituality of the culture. She is the recipient of the Commonwealth of Pennsylvania Governor’s Awards for the Arts, Artist of the Year, 2018. Her work is represented in the permanent collection of The State Museum of Pennsylvania, the African American Museum in Dallas, TX, the Huntington Museum of Art in Huntington WV, the United States Embassy in Khartoum, Sudan and has been displayed internationally at the United States Embassy in Ghana, as well as more than 50 major venues across the United States, including Tampa Museum of Art and Science, Tampa, FL; Heinz Regional History Center, Pittsburgh, PA; African American Museum, Philadelphia, PA; Reginald Lewis Museum of African American Art in Baltimore, MD. In 2014 Brewer was named a Master Visual Artist for the Pittsburgh region and she was honored with a Lifetime Achievement Award from the Pittsburgh Center for the Arts in 2009. She is a member of the Fiber Arts Guild of Pittsburgh and the Women of Visions as well as an emeritus board member of Associated Artists of Pittsburgh. Brewer earned a bachelor of arts from Columbus College of Art and Design, Columbus, Ohio.

Tina Williams Brewer is also president of the Trolley Station Oral History Center, a non-profit 501(c) 3 organization dedicated to exploring both visual and oral history of the African American community through the creative process. The exhibitions and educational programs focus predominantly on issues related to the African American community: family, spirituality and cultural history. Brewer reimagines oral stories and histories into visual representations, in essence, a fiber art ‘lukasa’ or memory board that conveys the essence of a story in order to preserve the cultural past.